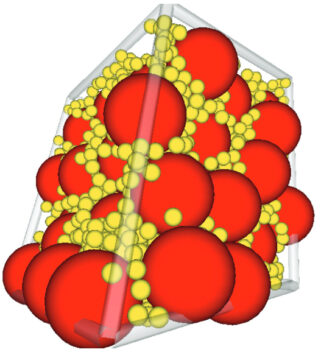 Despite its long history, there are many fundamental issues concerning random packings of spheres that remain elusive, including a precise definition of random close packing (RCP). We argue that the current picture of RCP cannot be made mathematically precise and support this conclusion via a molecular dynamics study of hard spheres using the Lubachevsky-Stillinger compression algorithm. We suggest that this impasse can be broken by introducing a new concept which can be made precise. Roughly speaking, the maximally random jammed (MRJ) state is the most disordered packing subject to the condition that it is jammed (mechanically stable).

Here are some links to discussions of this work in the popular press:

Nonuniversality of Density and Disorder in Jammed Sphere Packings

Nonuniversality of Density and Disorder in Jammed Sphere Packings

Recently, we show for the first time that collectively jammed disordered packings of three-dimensional monodisperse frictionless hard spheres can be produced and tuned using a novel numerical protocol with packing density as low as 0.6. This is well below the value of 0.64 associated with the maximally random jammed state and entirely unrelated to the ill-defined “random loose packing” state density. Specifically, collectively jammed packings are generated with a very narrow distribution centered at any density over a wide density range [0.6, 0.74048…] with variable disorder. Our results support the view that there is no universal jamming point that is distinguishable based on the packing density and frequency of occurrence. Our jammed packings are mapped onto a density-order-metric plane, which provides a broader characterization of packings than density alone. Other packing characteristics, such as the pair correlation function, average contact number, and fraction of rattlers are quantified and discussed.

Packing problems, such as how densely objects can fill a volume, are among the most ancient and persistent problems in mathematics and science. For equal spheres, it has only recently been proved that the face-centered cubic lattice has the highest possible packing fraction phi ~0.74. It is also well known that certain random (amorphous) jammed packings have phi ~0.64. Here, we show experimentally and with a new simulation algorithm that ellipsoids can randomly pack more densely-up to phi = 0.68 to 0.71 for spheroids with an aspect ratio close to that of M&M’s Candies-and even approach phi ~0.74 for ellipsoids with other aspect ratios. We suggest that the higher density is directly related to the higher number of degrees of freedom per particle and thus the larger number of particle contacts required to mechanically stabilize the packing. We measured the number of contacts per particle Z~10 for our spheroids, as compared to Z~6 for spheres. Our results have implications for a broad range of scientific disciplines, including the properties of granular media and ceramics, glass formation, and discrete geometry.

Here are some links to discussions of this work in the popular press:

References for a Colloquium Talk entitled Optimal Packings: Problems for the Ages presented by Professor Torquato on June 29, 2006 at the Aspen Center for Physics Workshop Physical and Mathematical Aspects of Packing.

Dense random packings of hard particles are useful models of granular media and are closely related to the structure of nonequilibrium low-temperature amorphous phases of matter. Most work has been done for random jammed packings of spheres and it is only recently that corresponding packings of nonspherical particles e.g., ellipsoids have received attention. Here we report a study of the maximally random jammed MRJ packings of binary superdisks and monodispersed superballs whose shapes are defined by |x_1|^2p+…+|x_d|^2p<=1 with d=2 and 3, respectively, where p is the deformation parameter with values in the interval (0,infinity). As p increases from zero, one can get a family of both concave (0<p<0.5) and convex (p>0.5) particles with square symmetry d=2, or octahedral and cubic symmetry d=3. In particular, for p=1 the particle is a perfect sphere circular disk and for p→ the particle is a perfect cube square. We find that the MRJ densities of such packings increase dramatically and nonanalytically as one moves away from the circular-disk and sphere point p=1. Moreover, the disordered packings are hypostatic, i.e., the average number of contacting neighbors is less than twice the total number of degrees of freedom per particle, and yet the packings are mechanically stable. As a result, the local arrangements of particles are necessarily nontrivially correlated to achieve jamming. We term such correlated structures “nongeneric.” The degree of “nongenericity” of the packings is quantitatively characterized by determining the fraction of local coordination structures in which the central particles have fewer contacting neighbors than average. We also show that such seemingly “special” packing configurations are counterintuitively not rare. As the anisotropy of the particles increases, the fraction of rattlers decreases while the minimal orientational order as measured by the tetratic and cubatic order parameters increases. These characteristics result from the unique manner in which superballs break their rotational symmetry, which also makes the superdisk and superball packings distinctly different from other known nonspherical hard-particle packings.

Maximally random strictly jammed hard-particle packings are the most disordered configurations of impenetrable particles that are globally incompressible and nonshearable. Such systems are therefore prototypical glasses, lacking long-range order and possessing diverging elastic moduli. It was previously known that jammed systems of uniform spherical particles are “hyperuniform,” meaning that such packings exhibit vanishing infinite-wavelength local-number-density fluctuations. Hyperuniformity is manifested in MRJ packings of monodisperse spheres via a nonanalytic linear small-wavenumber scaling in the structure factor, implying the presence of special quasi-long-range pair correlations scaling asymptotically as r-(d+1) in d Euclidean dimensions. However, further work into jammed materials composed of particles with size and shape distributions was previously unable to detect this property, and it has therefore been difficult to study these systems within a unified framework.

Recent work in our group has overcome this obstacle by utilizing a more general notion of hyperuniformity involving local-volume-fraction fluctuations. We show that maximally random jammed hard-particle packings share universal global structural signatures, regardless of the particle shapes or relative sizes. Fundamental to our analysis is the geometry of the void space external to the particles, which is always uniform over the large-scale structure of the packings. The constraint of strict jamming competes with the maximal randomness of the packing to induce signature quasi-long-range pair correlations in the two-point probability function. This work directly addresses a common misconception that hyperuniformity is tied to the homogeneity of particles in a jammed material. Our results have significant implications for a number of other systems with these same quasi-long-range correlations, including quantum systems and cosmological structures. In particular, our research suggests a unified structural method, independent of the physical model, to analyze these seemingly disparate systems. These conclusions support a remarkably strong generalization of the Torquato-Stillinger conjecture, namely that all saturated, maximally random strictly jammed packings of hard particles are hyperuniform with quasi-long-range pair correlations scaling with r-(d+1) in d Euclidean dimensions.

See also the fellowing media reports of this work:

We have formulated the problem of generating dense packings of nonoverlapping, nontiling nonspherical particles within an adaptive fundamental cell subject to periodic boundary conditions as an optimization problem called the adaptive-shrinking cell ASC formulation [1]. Because the objective function and impenetrability constraints can be exactly linearized for sphere packings with a size distribution in d-dimensional Euclidean space, it is most suitable and natural to solve the corresponding ASC optimization problem using sequential-linear-programming (SLP) techniques. We have implemented an SLP solution to produce robustly a wide spectrum of jammed sphere packings in dimensions two through six with a diversity of disorder and densities up to the respective maximal densities. The TJ algorithm is able to ensure that the final packings are truly jammed, produces disordered jammed packings with anomalously low densities, and is appreciably more robust and computationally faster at generating maximally dense packings, especially as the space dimension increases [2].

We found that candidate MRJ packings of equal-sized spheres in 3D generated by the TJ have a significantly higher degree of disorder (judging by bond-orientational and translational order metrics) than previous attempts using the Lubachevsky-Stillinger protocol. We also found the rattler fraction of these packings was significantly lower, converging towards 0.015 in the infinite-system limit. The rattler pair correlation statistics exhibit strongly correlated behavior contrary to the conventional understanding that they be randomly (Poisson) distributed. Dynamically interacting “polyrattlers” may be found imprisoned in shared cages as well as interacting through “bottlenecks” in the backbone and these clusters are mainly responsible for the sharp increase in the rattler pair correlation function near contact. We discover the surprising existence of polyrattlers with cluster sizes of up to five rattlers (which is expected to increase with system size). We also observe that rattlers in hard-sphere packings share an apparent connection with the low-temperature two-level system anomalies that appear in real amorphous insulators and semiconductors [3].

We have also used the TJ algorithm to explore the MRJ state for binary sphere packings. Previous attempts to simulate disordered binary sphere packings have been limited in producing mechanically stable, isostatic packings across a broad spectrum of packing fractions. We found that disordered strictly jammed binary packings can be produced with an anomalously large range of average packing fractions between 0.634 and 0.829 for small to large sphere radius ratios larger than 0.100. The average packing fractions of these packings at certain size and number ratios approach those of the corresponding densest known ordered packings. These findings suggest for entropic reasons that these high-density disordered packings should be good glass formers and that they may be easy to prepare experimentally. The identification and explicit construction of binary packings with such high packing fractions could have important practical implications for granular composites where density is critical both to material properties and fabrication cost, including for solid propellants, concrete, and ceramics. The densities and structures of jammed binary packings at various size and number ratios are also relevant to the formation of a glass phase in multicomponent metallic systems [4].

In dimensions beyond 3, we have generated and studied an ensemble of high-dimensional isostatic jammed hard-sphere lattices. This lattice model retains many of the crucial structural features of the classical hard-sphere model and propose it as a model for the jamming and glass transitions that enables exploration of much higher dimensions than are usually accessible [5].

In two dimensions, we have used the TJ algorithm to show the existence of relatively large maximally random jammed (MRJ) packings with exactly isostatic jammed backbones and a packing fraction (including rattlers) of 0.826. By contrast, the concept of random close packing (RCP) that identifies the most probable packings as the most disordered misleadingly identifies highly ordered disk packings as RCP in 2D. Fundamental structural descriptors such as the pair correlation function, structure factor, and Voronoi statistics show a strong contrast between the MRJ state and the typical hyperstatic, polycrystalline packings with packing fraction 0.88 that are more commonly obtained using standard packing protocols. Establishing that the MRJ state for monodisperse hard disks is isostatic and qualitatively distinct from commonly observed polycrystalline packings contradicts conventional wisdom that such a disordered, isostatic packing does not exist due to a lack of geometrical frustration and sheds light on the nature of disorder [6].

Invited talk by Professor Torquato entitled “Packing Nonspherical Particles: All Shapes Are Not Created Equal” given at the March American Physical Society Meeting in Boston on February 28, 2012. See also the APS link: http://absuploads.aps.org/presentation.cfm?pid=10202.