The prime numbers have been a source of fascination for millennia and continue to surprise us. Motivated by the hyperuniformity concept, we have shown that the prime numbers in certain large intervals possess unanticipated order across length scales and represent the first example of a new class of many-particle systems with pure point diffraction patterns, which we call effectively limit-periodic. 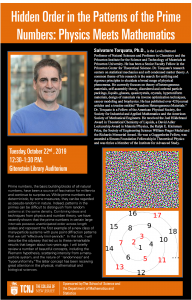 While prime numbers are deterministic, by some probabilistic descriptors, they can be regarded as pseudo-random in nature. Indeed, the primes can be difficult to distinguish from a random configuration of the same density. For example, assuming a plausible conjecture, Gallagher proved that the gaps between primes in certain short intervals follow a Poisson distribution; see P. X. Gallagher, On the distribution of primes in short intervals, Mathematika 23 4–9 (1976).

Assuming the Riemann hypothesis, it is known that the nontrivial zeros of the Riemann zeta function form a one-dimensional point process on the line that is disordered but, remarkably, hyperuniform. Because information about the primes can in principle be deduced from information about the nontrivial zeros of the zeta function via explicit formulas, one might expect the primes to encode hyperuniform correlations seen in the Riemann zeros. This motivated us to calculate the prime numbers in certain intervals in a distinguished limit.

Scattering of the Primes: Numerical Experiments

Scattering of the Primes: Numerical Experiments

We numerically studied the structure factor \(S(k)\) of the prime numbers in an interval \([M,M+L]\) with \(M\) large, and \(L/M\) smaller than unity. We showed that the structure factor of the prime-number configurations in such intervals exhibits well-defined Bragg-like peaks along with a small ‘diffuse’ contribution. This indicates that primes are appreciably more correlated and ordered than previously thought. We also showed numerically that the diffuse part decays slowly as \(M\) and \(L\) increases, suggesting that it vanishes in an appropriate infinite-system-size limit.

Scattering of the Primes: Theory

Scattering of the Primes: Theory

We studied the pair correlations between prime numbers in an interval \(M \leq p \leq M + L \) with \(M \to \infty,~ L/M \to \beta > 0\). By analyzing the structure factor, we proved, conditionally on the Hardy-Littlewood conjecture on prime pairs, that the primes are characterized by unanticipated multiscale order. Specifically, their limiting structure factor is that of a union of an infinite number of periodic systems and is characterized by dense set of Dirac delta functions. Primes in dyadic intervals are the first examples of what we call effectively limit-periodic point configurations. This behavior implies anomalously suppressed density fluctuations compared
to uncorrelated (Poisson) systems at large length scales, which is now known as hyperuniformity. Using a scalar order metric \(\tau\) calculated from the structure factor, we identified a transition between the order exhibited when \(L\) is comparable to \(M\) and the uncorrelated behavior when \(L\) is only logarithmic in \(M\). Our analysis for the structure factor leads to an algorithm to reconstruct primes in a dyadic interval with high accuracy. Effective limit-periodicity deserves future investigation in physics, independent of its link to the primes.