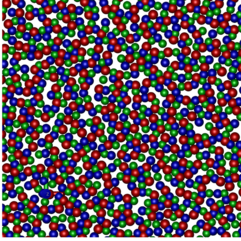 Birds are known for their extremely acute sense of vision. The very peculiar structural distribution of five different types of cones in the retina underlies this exquisite ability to sample light. It was recently found that each cone population as well as their total population display a disordered pattern in which long-wavelength density fluctuations vanish [ Jiao et al., Phys. Rev. E 89, 022721 (2014)]. This property, known as hyperuniformity, is also present in perfect crystals. In situations like the avian retina in which both the global structure and that of each component display hyperuniformity, the system is said to be multihyperuniform. In this work, we aim at devising a minimal statistical-mechanical model that can reproduce the main features of the spatial distribution of photoreceptors in avian retina, namely the presence of disorder, multihyperuniformity, and local heterocoordination. This last feature is key to avoiding local clustering of the same type of photoreceptors, an undesirable feature for the efficient sampling of light. For this purpose, we formulate a minimal statistical-mechanical model that definitively exhibits the required structural properties: an equimolar three-component mixture (one component to sample each primary color: red, green, and blue) of nonadditive hard disks to which a long-range logarithmic repulsion is added between like particles. Interestingly, a Voronoi analysis of our idealized system of photoreceptors shows that the space-filling Voronoi polygons display a rather uniform area distribution, symmetrically centered around that of a regular lattice, a structural property also found in human retina. Disordered multihyperuniformity offers an alternative to generate photoreceptor patterns with minimal long-range concentration and density fluctuations. This is the key to overcoming the difficulties in devising an efficient visual system in which crystal-like order is absent.