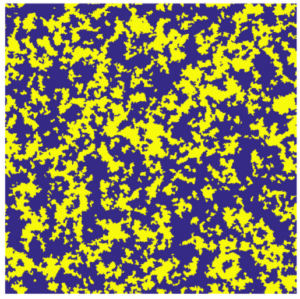 In their seminal paper on scattering by an inhomogeneous solid, Debye and coworkers proposed a simple exponentially decaying function for the two-point correlation function of an idealized class of two-phase random media. Such Debye random media, which have been shown to be realizable, are singularly distinct from all other models of two-phase media in that they are entirely defined by their one- and two-point correlation functions. To our knowledge, there has been no determination of other microstructural descriptors of Debye random media. In this paper, we generate Debye random media in two dimensions using an accelerated Yeong-Torquato construction algorithm. We then ascertain microstructural descriptors of the constructed media, including their surface correlation functions, pore-size distributions, lineal-path function, and chord-length probability density function. Accurate semianalytic and empirical formulas for these descriptors are devised. We compare our results for Debye random media to those of other popular models (overlapping disks and equilibrium hard disks) and find that the former model possesses a wider spectrum of hole sizes, including a substantial fraction of large holes. Our algorithm can be applied to generate other models defined by their two-point correlation functions, and their other microstructural descriptors can be determined and analyzed by the procedures laid out here.