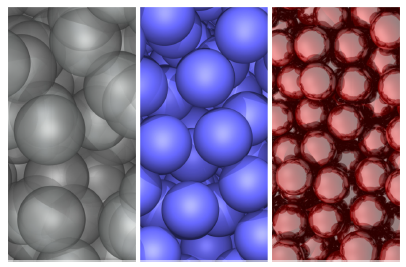 In the first paper of this series, we introduced Voronoi correlation functions to characterize the structure of maximally random jammed (MRJ) sphere packings across length scales. In the present paper, we determine a variety of different correlation functions that arise in rigorous expressions for the effective physical properties of MRJ sphere packings and compare them to the corresponding statistical descriptors for overlapping spheres and equilibrium hard-sphere systems. Such structural descriptors arise in rigorous bounds and formulas for effective transport properties, diffusion and reactions constants, elastic moduli, and electromagnetic characteristics. First, we calculate the two-point, surface-void, and surface-surface correlation functions, for which we derive explicit analytical formulas for finite hard-sphere packings. We show analytically how the contact Dirac delta function contribution to the pair correlation function \(g_2(r)\) for MRJ packings translates into distinct functional behaviors of these two-point correlation functions that do not arise in the other two models examined here. Then we show how the spectral density distinguishes the MRJ packings from the other disordered systems in that the spectral density vanishes in the limit of infinite wavelengths; i.e., these packings are hyperuniform, which means that density fluctuations on large length scales are anomalously suppressed. Moreover, for all model systems, we study and compute exclusion probabilities and pore size distributions, as well as local density fluctuations. We conjecture that for general disordered hard-sphere packings, a central limit theorem holds for the number of points within an spherical observation window. Our analysis links problems of interest in material science, chemistry, physics, and mathematics. In the third paper of this series, we will evaluate bounds and estimates of a host of different physical properties of the MRJ sphere packings that are based on the structural characteristics analyzed in this paper.