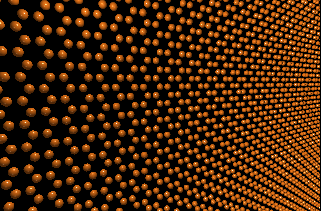 Motivation
Motivation
“Self-assembly” of atomic, molecular and supramolecular systems is a topic that has been receiving a great deal of attention of late. Roughly speaking, it is the phenomenon of system components arranging themselves via their mutual interaction to form a larger functional unit. Examples are plentiful; in biology, they include but are not limited to the spontaneous formation of the DNA double helix from two complementary oligonucleotide chains, the formation of lipid bilayers as membranes, and spontaneous protein folding into the native, functional state. On the other hand, self-assembly can be employed in the synthesis of nanostructures as an alternative to nanolithography. For example, Whitesides has demonstrated that complex two-dimensional structure can emerge in organic molecules placed on an inorganic surface.

This is an emerging field with a wealth of experimental data that does not yet have a predictive theoretical basis. Where there has been theoretical work, it has focused on explaining the self-assembly in systems with given interparticle interactions or of known macromolecular structure. These studies solve the “forward” problem of statistical mechanics, i.e. they take the interaction as known and solve for the structure and equilibrium properties of the system. In this work, we take the inverse appraoch – given a desired many-particle configuration of the system, we search for the optimal interaction among component particles which spontaneously produces that target structure. Our goal in general is to devise methods that can be applied to any predetermined target structure, be they amorphous or even quasicrystalline, thus extending the traditional meaning of self-assembly beyond that of periodic structures.

We choose colloidal systems as models for studying self-assembly. Colloids are ideally suited for this purpose because interparticle interactions are tunable. The colloid interparticle potential, V(r), can contain a hard-core term, a charge dispersion (van der Waals) term, a dipole-dipole term (isotropic in 2D), a screened-coulombic (Yukawa) term, and a short-ranged attractive depletion term. All of these have adjustable amplitudes, and in the case of the Yukawa term, the screening length can be adjusted by changing the salt concentration in solution. Taken together, these interactions form a large set of functional forms for the interaction potential. Although we do not limit ourselves in this work to these interactions, we bear in mind the limits of complexity that these interactions will allow and we try not to exceed these bounds in searching for our optimized potentials.

The adjustable colloidal interactions discussed in the previous paragraph are by nature isotropic. Thus, in this work, we consider only potentials that have this property. Even for this relatively simple class of potentials it isn’t at all clear what are the limitations for self-assembly. For example, chiral structures with specified handedness cannot be distinguished energetically from their mirror-image counterpart. What other structures cannot be valid target structures? A central question in colloidal and photonics research is regarding whether a diamond lattice (in three dimensions) can be self-assembled, since such a lattice of dielectric spheres has a large photonic bandgap and would therefore be a viable material for future photonic devices.

Low-Coordinated Crystal Ground States
Low-Coordinated Crystal Ground States
Square and Honeycomb
In a series of two papers, (Optimized Interactions for Targeted Self-Assembly: Application to Honeycomb Lattice, Physical Review Letters, 95, 228301 (2005)) and (Designed Isotropic Potentials via Inverse Methods for Self-Assembly, Physical Review E, 73, 011406 (2006)), we studied self-assembly in two-dimensional systems. The most significant result therein was the discovery of an isotropic pair potential that yields the honeycomb lattice as its ground state; the honeycomb is a highly directional, three-fold coordinated structure that can be considered the two-dimensinoal analogue of the diamond lattice (see this potential above). Hence, its self-assembly by a non-directional potential is indeed counterintuitive. In these publications, we also presented a potential that self-assembled the square lattice (also shown above). In this study, we developed two inverse statistical-mechanical schemes to optimize pair potentials for self-assembly. The first, the so-called “zero-temperature scheme” is based on maximizing the energy difference between the target lattice and a number of enumerated competitors, subject to the constraint that the target lattice is mechanically stable (phonon modes all real). The second, called the “near-melting” scheme, uses iterated molecular dynamics simulations in order to minimize the Lindemann parameter of the target lattice at temperatures near its melting point.

Simple Cubic
In another paper (Self-Assembly of the Simple Cubic Lattice via an Isotropic Potential Physical Review E, 74 021404 (2006)), we used the zero-temperature algorithm to derive a potential that yields the simple cubic lattice in three dimensions. This is a deceptively difficult problem.

Diamond and Wurtzite
In a more recent paper (Synthetic Diamond and Wurtzite Structures Self-Assemble with Isotropic Pair Interactions Physical Review E 75, 031403 (2007)), we derived pair potentials that yield the diamond and wurtzite structures (cubic and hexagonal diamond) upon slow cooling. Due to their structural similarity (akin to that of the FCC and HCP lattices), differentiating between the two required careful fine tuning, and thus, potentials with more structure than previous ones. Although an isotropic potential had been previously found which yields the diamond lattice by Likos et. al., its defining feature is an extremely soft (logarithmic) core, which is not realistic for colloidal interactions. Our potential has a more realistic 1/r^12 core.

Negative Poisson's Ratio Materials via Isotropic Interactions
Negative Poisson’s Ratio Materials via Isotropic Interactions
When a material is stretched along a particular direction, the material is expected to shrink in the lateral direction – like a rubber band. Conversely, the sides of a material usually bulge when compressed in a vice. Most materials change their lateral dimensions in this fashion when subjected to tension or compression. However, materials can respond in the completely opposite way – that is, they expand laterally when stretched (see animation below) or, equivalently, shrink laterally when compressed. Such materials are said to have negative Poisson’s ratio and are referred to as auxetic materials. Auxetic materials have technological importance. For example, they can used to improve the performance transducers, as components in microelectromechanical systems, as strain amplifiers, shock absorbers and fasteners, to mention a few examples.

Poisson Ratio Cartoon
We report in Physical Review Letters [Negative Poisson’s Ratio Materials via Isotropic Interactions], that under tension (i.e., negative pressure), standard isotropic interactions of two- and three-dimensional many-particle systems (such as colloids) can result in elastically isotropic (nondirectional) auxetic behavior provided that the pressure of the system is negative. Matter characterized by negative pressure is unusual. An air-filled spherical balloon will shrink in size if placed deep in an ocean consisting of ordinary water. On the other hand, such a spherical balloon will expand in size if placed in liquid ocean possessing “negative pressure.” Matter under negative pressure exists. A mundane example is tempered glass. A more exotic example comes from cosmology, where present thinking links the expanding Universe to a negative pressure.

The result reported in Physical Review Letters is unexpected, since an inherently anisotropic behavior (auxetic behavior) arises from isotropic interactions. Indeed, most previously discovered auxetic materials exhibit complex, carefully designed anisotropic interactions. We have shown the existence of elastically isotropic auxetic behavior at zero temperature for common crystal structures in two and three dimensions, namely, the triangular lattice in two dimensions, and the face-centered cubic lattice in three dimensions. These lattices provide the densest arrangements of equal-sized spheres in these dimensions.