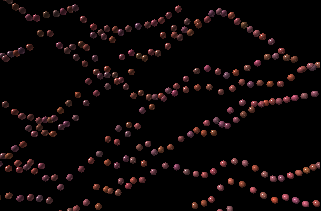 Collective density variables have proved to be useful tools in the study of static and dynamic phenomena occurring in many-body systems. More recently, the collective-coordinate approach has been used to generate crystalline as well as disordered classical ground states for bounded or “soft” interactions using numerical optimization techniques in two and three dimensions. Soft interactions possess great importance in soft-matter systems,such as colloids, microemulsions, and polymers. The existence of disordered ground states is a counterintuitive notion.

Suppose that the particles interact pairwise with an isotropic pair potential

so that the total energy is

Suppose furthermore that this pair potential has a Fourier transform

where in the last expression the summation covers the entire set of ks. Then it is straightforward to show that the total potential energy for the N-particle system can be exactly expressed in the following manner in terms of the real collective density variables

The real collective density variables are

The Fourier coefficients of the density field

are related to C(k) by

and the structure factor

We choose this form for simplicity recognizing at the same time that any other positive V(k) for |k| < K but zero otherwise would lead to the same results. Since the minimum of C(k) is -N/2, the global minimum of the potential energy defined has the value of

if and only if there exist particle configurations that satisfy all constraints that C(k) be minimal. For a system of N particles in d dimensions, there are dN degrees of freedom. We introduce the dimensionless parameter

Imposing constraints that C(k) be minimal for k less than K has remarkable implications on the ground state structure. Three regions were identified: disordered, wavy crystalline, and crystalline.

Disordered configurations, as shown below left, have no long-ranged order. The associated structure factor, below right, is minimal for the concentric region around the origin while all other wave vectors are free to fluctuate. 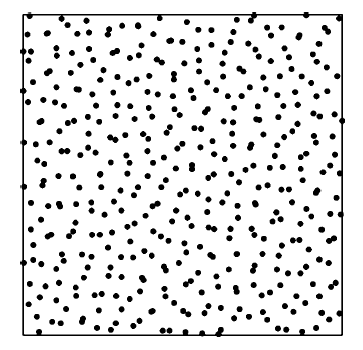 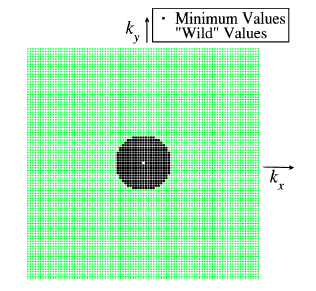 The animations below show the trajectories of particles, initially placed randomly inside the box, as the potential energy is minimized along a steepest descent path to a disordered ground state
(χ=0.26, left and χ=0.49, right).

Wavy crystals, below left, have apparent short-range order but lack translational symmetry. Constraints about k=0 implicit impose constrains on other wave vectors. Notice the circular region of minium for S(k), below right, and the emerging areas of minima that are implicitly constrained. 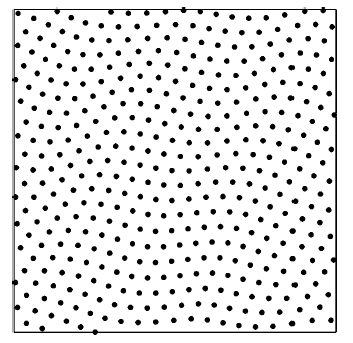 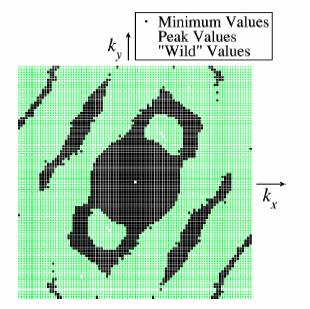 Upon imposing sufficient number of constraints, all the wave vectors except for those associated
with Bragg scattering, are minimized. The resulting configuration and structure factor are unique
to the triangular lattice. 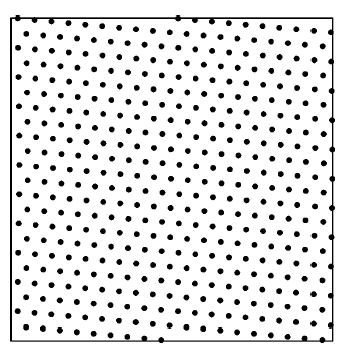 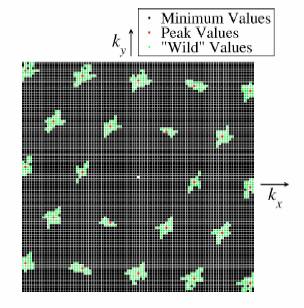 These results have implications for disordered and hyperuniform ground states. The full paper can be found
here.

Extending the two dimensional analysis to three dimensions, disordered and crystalline
particle patterns emerged as ground state structures. Below left is a disordered structure
and below right is the fcc lattice ground state. 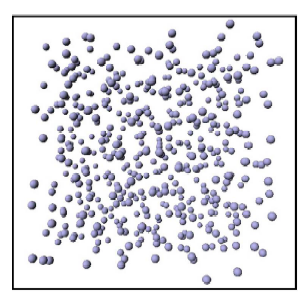 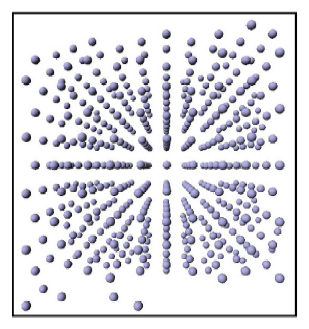 The introduction of a four-body potential energy function allows for the small-k region of the
structure factor to be tailored. The function is

where the intended form of the structure factor is related by

where alpha = 1 (below left) is relevant to the Harrison-Zeldovich model of the early universe
and alpha = 6 (below right) has relevance to jammed hard-sphere packings. As evident by the
corresponding particle patterns, the curvature in S(k) disrupts the order of the ground states. 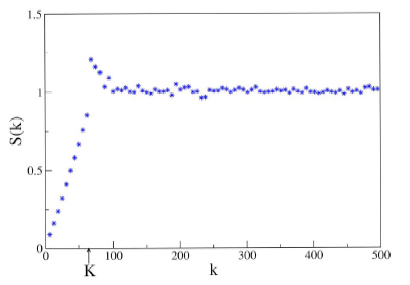 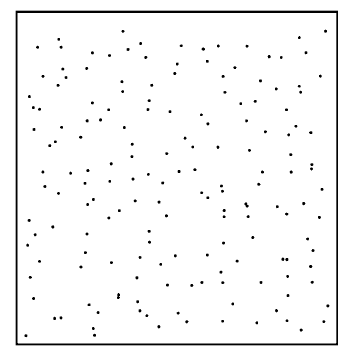 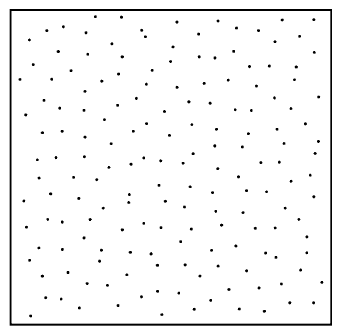 The full paper can be found
here.

We showed that in increasing the system size does not affect the local structure and that in the infinite-volume limit, the ground states are truly disordered. Below compares the raidal distribution function and structure factor for a small and a large system. 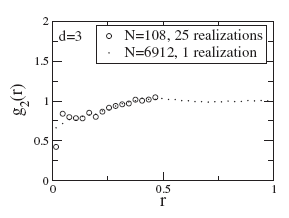 Stealth materials are constructed in so that S(k) = 0 for a concentric region around k = 0. Increasing this region’s size drives the system of particles to increasing order as shown in the next figure. 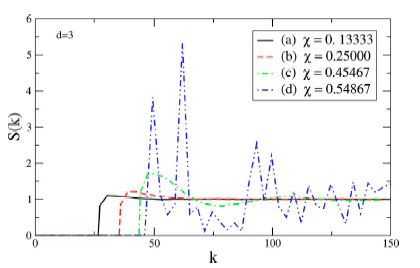 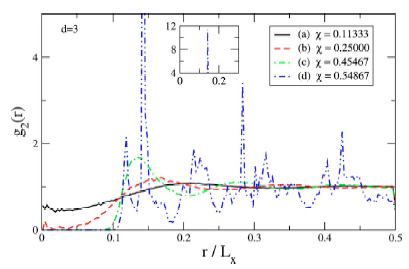 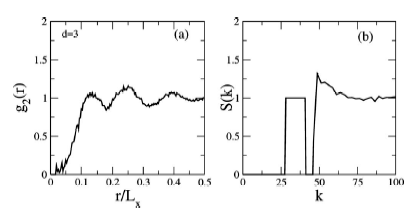 We also explore in detail the constraints where S(k) is forced to be nonzero
for large regions of k-space. These details can be found in the full paper.
The full paper can be found
here.


When slowly cooling a typical liquid we expect that it will undergo a freezing transition to a solid phase at some temperature and then attain a unique perfectly ordered crystal ground-state configuration. Particles interacting with “stealthy” long-ranged pair potentials have classical ground states that are—counterintuitively—disordered, hyperuniform, and highly degenerate. These exotic amorphous states of matter are endowed with novel thermodynamic and physical properties. Previous investigations of these unusual systems relied heavily on computer-simulation techniques. The task of formulating a theory that yields analytical predictions for the structural characteristics and physical properties of stealthy degenerate ground states in multiple dimensions presents many theoretical challenges. A new type of statistical-mechanical theory, as we show here, must be invented to characterize these exotic states of matter.

We derive general exact relations for the thermodynamic (energy, pressure, and compressibility) and structural properties that apply to any ground-state ensemble as a function of its density and dimension in the zero-temperature limit. We show how disordered, degenerate ground states arise as part of the ground-state manifold. We then specialize our results to the canonical ensemble by exploiting an ansatz that stealthy states behave remarkably like “pseudo”-equilibrium hard-sphere systems in Fourier space. This mapping enables us to obtain theoretical predictions for the pair correlation function, structure factor, and other structural characteristics that are in excellent agreement with computer simulations across one, two, and three dimensions. We also derive accurate analytical formulas for the properties of the excited states.

Our results provide new insights into the nature and formation of low-temperature states of amorphous matter. Our work also offers challenges to experimentalists to synthesize stealthy ground states at the molecular level.
The full paper can be found
here. 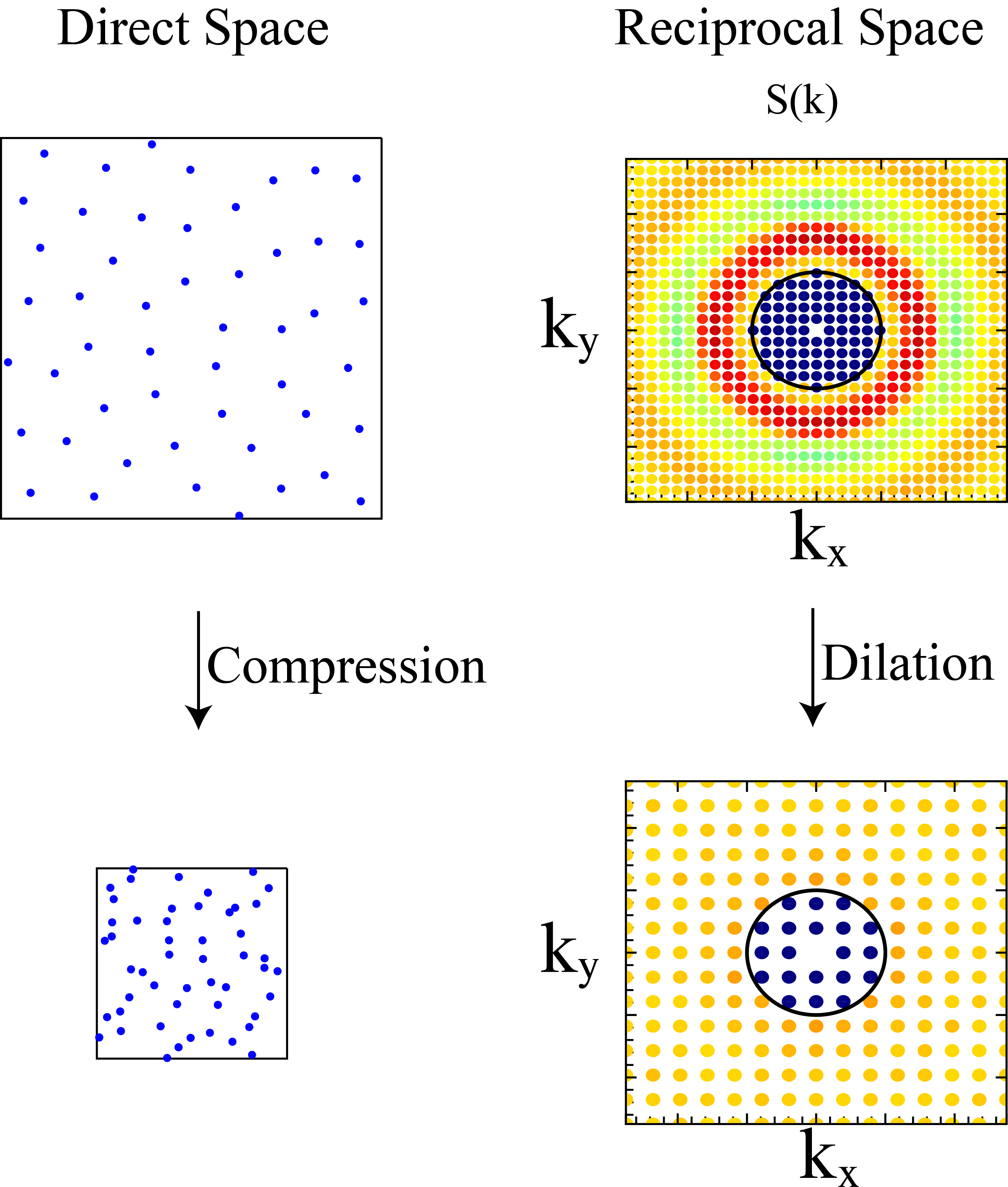 
Systems of particles interacting with so-called “stealthy” pair potentials have been shown to possess infinitely-degenerate disordered hyperuniform classical ground states with novel physical properties. Previous attempts to sample the infinitely-degenerate ground states used energy minimization techniques, introducing an algorithm dependence that is artificial in nature. Recently, an ensemble theory of stealthy hyperuniform ground states was formulated to predict the structure and thermodynamics that was shown to be in excellent agreement with corresponding computer simulation results in the canonical ensemble (in the zero-temperature limit). In our study, we provide details and justifications of the simulation procedure, which involves performing molecular dynamics simulations at sufficiently low temperatures and minimizing the energy of the snapshots for both the high-density disordered regime, where the theory applies, as well as lower densities. We also use numerical simulations to extend our study to the lower-density regime. We report results for the pair correlation functions, structure factors, and Voronoi cell statistics.

In the high-density regime, we verify the theoretical ansatz that stealthy disordered ground states behave like “pseudo” disordered equilibrium hard-sphere systems in Fourier space. The pair statistics obey certain exact integral conditions with very high accuracy. These results show that as the density decreases from the high-density limit, the disordered ground states in the canonical ensemble are characterized by an increasing degree of short-range order and eventually the system undergoes a phase transition to crystalline ground states. In the crystalline regime (low densities), there exist “stacked-slider configurations,” aperiodic structures that are part of the ground-state manifold, but yet are not entropically favored. We also provide numerical evidence suggesting that different forms of stealthy pair potentials produce the same ground-state ensemble in the zero-temperature limit. Our techniques may be applied to sample the zero-temperature limit of the canonical ensemble of other potentials with highly degenerate ground states.

Additionally, we investigate using both numerical and theoretical techniques metastable stacked-slider phases. Our numerical results enable us to devise analytical models of this phase in two, three and higher dimensions. Utilizing this model, we estimated the size of the feasible region in configuration space of the stacked-slider phase, finding it to be smaller than that of crystal structures in the infinite-system-size limit, which is consistent with our previous findings. In two dimensions, we also determine exact expressions for the pair correlation function and structure factor of the analytical model of stacked-slider phases and analyze the connectedness of the ground-state manifold of stealthy potentials in this density regime. We demonstrate that stacked-slider phases are distinguishable states of matter; they are nonperiodic, statistically anisotropic structures that possess long-range orientational order but have zero shear modulus. We outline some possible future avenues of research to elucidate our understanding of this unusual phase of matter.
The full papers can be found
here.
and
here. 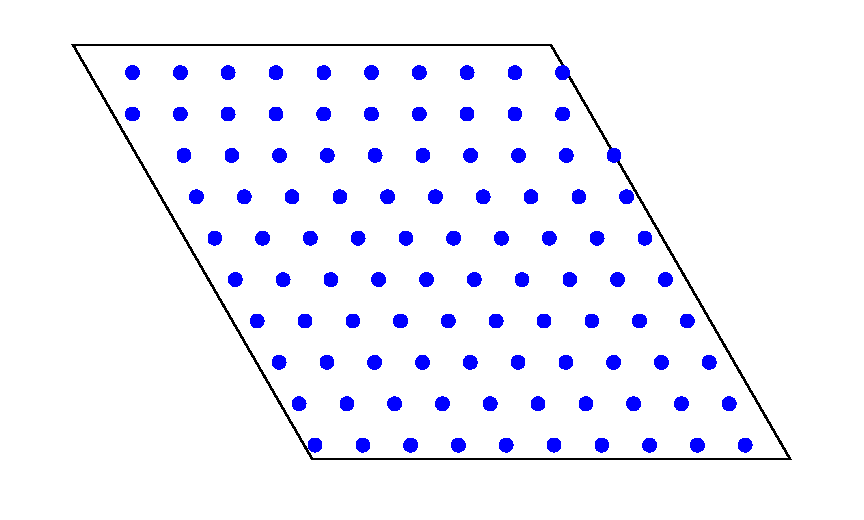 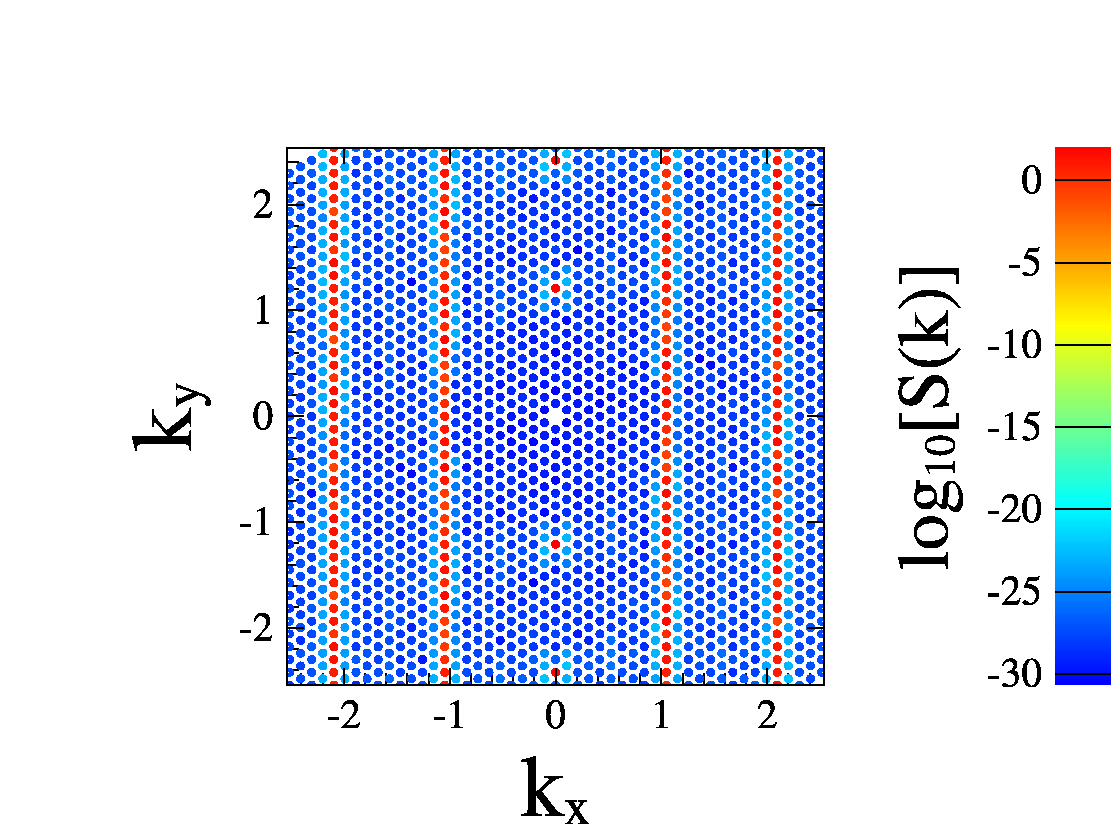 A video that shows the time evolution of a 2D system of 400 particles that interact with a “stealthy” long-range pair potential at \(\chi=0.4\). The starting configuration is completely random (not hyperuniform) at some high temperature \(T\). Then the system is slowly cooled until \(T=0\). This final state is the ground state (energy minimizing configuration), which counterintuitively is disordered, stealthy and hyperuniform. During the evolution, you can see that the particles increasingly repel one another, but on top that, the system is endowed with the long-range hyperuniformity property, which can be regarded to be a “hidden order” at large lengths because it is hard to detect by eye.


It has recently been shown that disordered hyperuniform many-particle systems represent new distinguishable states of amorphous matter that are poised between a crystal and a liquid are are endowed with novel physical and thermodynamic properties. Such systems have shown to exist as ground states, i.e., at a temperature of absolute zero. Such “stealthy” and hyperuniform states are unique in that they are transparent to radiation for a range of wavelengths. In this study, we ask whether Ising models of magnets, called spin chains in one dimension, can possess spin interactions that enable their ground states to be disordered, stealthy, and hyperuniform. Using inverse statistical-mechanical theoretical methods, we do demonstrate the existence of such states, which should be experimentally realizable.
The full paper can be found
here. Figure 5: A visualization of how \(\rho(k)\) cancels at the smallest positive wavenumber \(k=2\pi/N\) for a stealthy spin configuration of size \(N=12\) on the 1D integer lattice. The unit vectors represent the positive spin (\(\sigma_j=+1\)) exponential \(e^{i2\pi j/N}\) terms from the collective density variables \(\rho(k=2\pi/N)=\sum_{j=1}^N\sigma_je^{i2\pi j/N}\). The negative spin terms also cancel in a similar fashion. The plot contains a gray regular polygon including all possible unit vectors. The unit vectors that are summed for the positive spins in this particular configuration are colored according to how they cancel with other vectors. In this case, the scattering cancellation can be decomposed into two doublets (green and blue) and one triplet (red).

Slides from the Prof. Torquato’s February 16, 2009 talk are available
here.